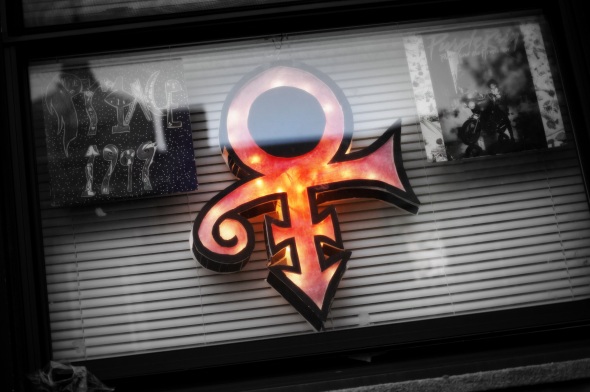 On Thursday, April 21, 2016 it was reported that the legendary music icon known to most as Prince, passed away.

While details surrounding his death are still unclear, Chicagoans of the city’s North Center neighborhood gathered together to reminiscence, commiserate and dance in honor to the late musician’s memory.

It was of little surprise to me that the North Center Square was host to the event. Through the last few years during the holiday season, I noticed a festive illuminated sign in an area apartment window featuring the artist’s iconic symbol along with the text “Merry Princemas.”

In response to the joy brought on by the unique decoration, a group of Prince themed carolers were formed to help spread some fabulous holiday cheer in the neighborhood.

The group, which seemed to largely organize the vigil, were in attendance in full regalia.

Below are a few images I took during the evening’s festivities. 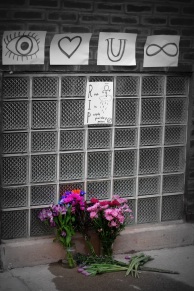 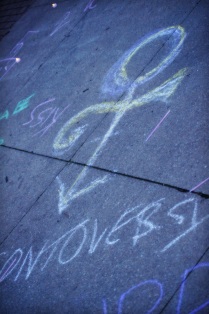 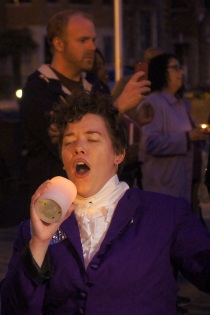 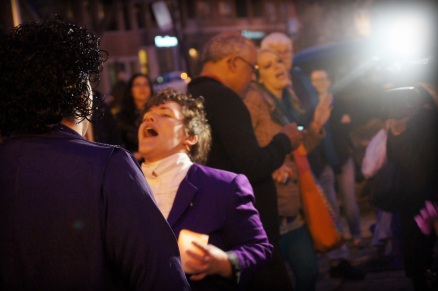 Last weekend was a busy one. Saturday, after seven years of working on my Bachelors degree on a part-time basis, I finally graduated and attended my commencement ceremony. The following day I, along with Brett, ventured out to Gary, Indiana with two witches in tow for Day Two of the Dubwitch video shoot for the song “Cellophane” directed by John Borowski.

Originally, I was scheduled to play the part of one of the witches (as I had done for the live show), but due to commencement I could not. I did however have a fantastic time taking photos in the beautiful yet tragic decay of City Methodist Church, a site that has been used for a number of previous productions. (I plan on posting another series of images soon that focuses purely on the building itself.)

Below are just a few of my favorite photos from the shoot focusing on singer Stella Katsoudas as well as the cast and crew. 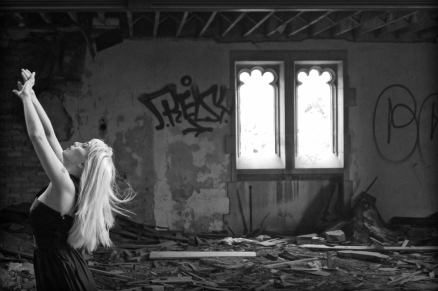 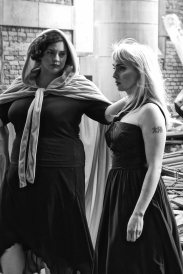 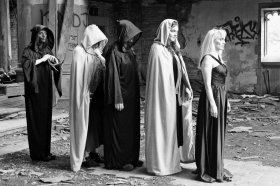 The cast of the new CW show “Witches and Warlocks of the Upper East Side.”

Recently, Stella Katsoudas, a musician who I have been a fan of for quite some time asked me if I’d like to join her on stage for an upcoming performance supporting her latest project, Dubwitch. So, I and my friend Emily Barney accompanied her during a March 14th live show at a Chicago venue called Bar 10 DOORS. We donned long grey witch cloaks while Stella showcased some truly striking skull-face makeup with an impressive light display put together by the very talented Terrence Pogge.

A while back I wrote an extensive article about Stella’s various projects so this was a really fun experience to be a part of.

The following live images were taken by my husband Brett Koppen: 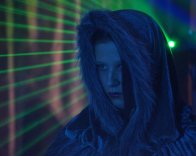 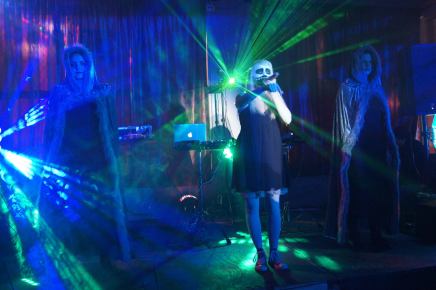 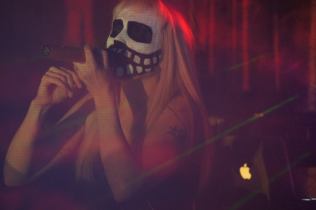 On Saturday, January 10th, I ventured out into the brave cruel world that is known as Chicago in January. The city had been experiencing sub-zero temperatures earlier in the week and I was not terribly inclined to leave the warm cocoon of my home. However, with the weather having warmed up to a whopping 20 degree heatwave, I made my way out to Subterranean located in Chicago’s Wicker Park neighborhood.

Performing that evening was A.D.D, The Streets and the band Aracane Framework (Amicus also performed but I did not make it in time for their set.). I had met the vocalist of Aracane Framework earlier in December at my brother in law’s Christmas party and attended the show at his behest.

While I’ve had just about as much as I can take of Chicago’s typically brutal winters, I’m glad I attended. 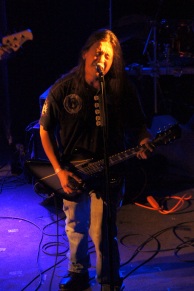 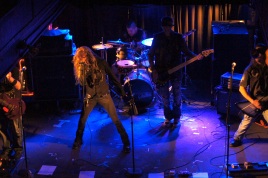 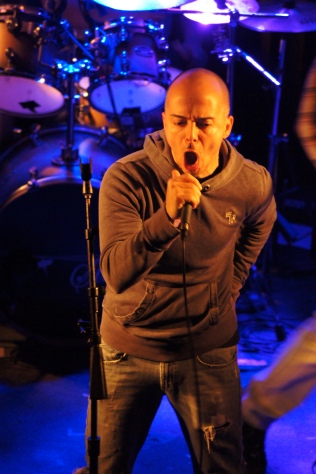 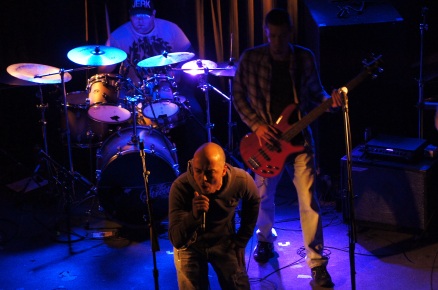 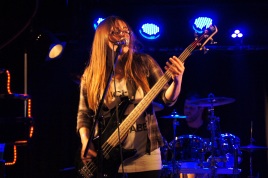 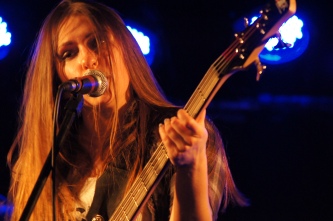 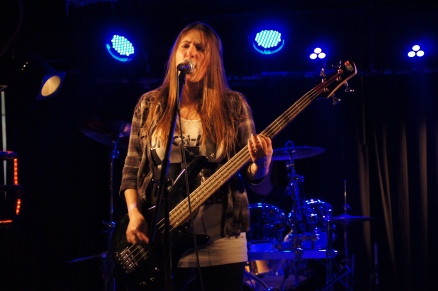 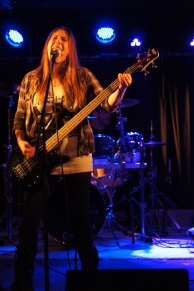 Veruca Salt’s first tour with the original lineup after fifteen years at Lincoln Hall in Chicago. It was a fantastic show where the excitement of the band and crowd could be clearly felt. Very happy to have attended. Looking forward to hearing more new music from the group. 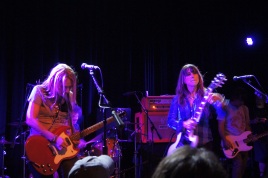 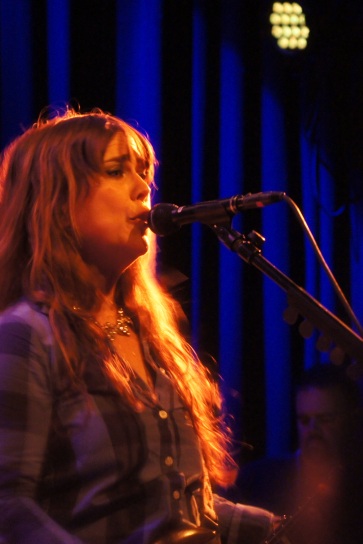 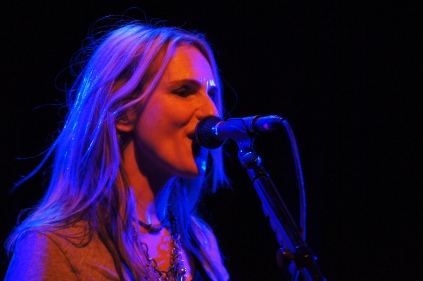 Hit Me Like A Man is the second EP released by The Pretty Reckless, their first EP previed tracks from their full-length Light Me Up.

This EP starts off with a live rendition of the band’s first ever released single Make Me Wanna Die. The Pretty Reckless seems to pride themselves on being a tight live band, which they very well should. It’s obvious that they take what they do seriously while still keeping things fun. They are exciting, energetic and most importantly very solid players. The current lineup consists of Momsen, of course, with her raspy vocals paired with Ben Phillips focused yet emotional guitar licks, on top of Mark Damon’s bass and Jamie Perkin’s drums.  While this is a solid example of their live work it seemed slightly odd that this would be the opening track for the EP when perhaps a new track would have made for a more interesting opener.

The title track makes it’s entrance as song number two with crunching full guitars and a nice smooth bass creating a blend of 90’s grunge with a bit of blues. Momsen begins the song with a breathy croon but quickly builds up to her usual raspy seductive scream as she approaches the chorus with lyrics that likely have a few hard core feminists wincing, “Hit me like a man and love me like a woman.”

Following in at track number four we have another live rendition, this time of another track off their full length, Since You’re Gone. Once again this is a solid example of their skill level and live exuberance however after hearing the bluesy and emotional turn they’ve taken with the new tracks it seems slightly out of place in this playlist.

Up next is the slow and sexy blues infused Cold Blooded that quickly brings to mind any scene in any movie where a sexy woman slowly enters a bar as the barflies attempt to figure out what just wandered into their dark and dingy world. This isn’t a bad thing. In fact this song is the perfect example of TPR’s ability to create a dramatic mental picture with their music. Perhaps this song would be well suited in an episode of True Blood.

Aww Taylor… if that shirt was black you all would only have to do one load of laundry!

As I mentioned in my previous review of their performance from a stop on the Hey Cruel World Tour, The Pretty Reckless certainly have the talent but may have a rough time breaking through the too cynical music critics who feel that TPR just don’t have the street cred to earn their respect due to Momsen’s acting resume. Well, if the too cool for the room crowd can’t find the fun then I guess that’s their loss.

Overall, I give this EP 4 out of 5 ducks. The addition of the live tracks simply takes away from the mood of the newer tracks. Perhaps it would have gotten a full 5 duck rating had Since You’re Gone been replaced by either a something from Light Me Up that was more in theme with the new material or if an additional new track was added in it’s place.

Hit Me Like A Man is available on iTunes and Amazon.

Till next time folks,

The Pretty Reckless, lead by vocalist Taylor Momsen, rolled into Milwaukee, WI this Saturday as the opening act on Marilyn Manson‘s Hey Cruel World Tour at The Rave/Eagles Ballroom.  Momsen, known also from her various acting roles, took to the stage with the swagger of a modern style Cherie Curie strutting onstage in black vinyl and fishnets while her Rupunzel-esque locks floated around her.

The band kicked off their set with the blues infused Hit Me Like A Man, off their new EP of the same name. Though The Pretty Reckless isn’t usually associated with being as heavy or dark as Manson, the crowd seemed to contain a fair amount of supporters for the group as well as some newly converted fans as their performance went on.

The Pretty Reckless live at The Rave in Milwaukee

Momsen’s soulful husky voice resonated throughout the ballroom grabbing concert goers attention while her enthusiastic and vixenish stage presence certainly held it. Lead guitarist Ben Phillips chimed in on vocals during another new track, the slow and sultry Cold Blooded along with the bands first single Make Me Wanna Die, while showing impressive technical skills with his tightly focused solos. Miss Nothing, Just Tonight and the moody yet intense Zombie were also received with positive crowd reaction. The band also performed My Medicine who’s video, which Momsen made sure to mention, features adult film star Jenna Haze.

The Pretty Reckless put on a strong, solid and energetic set but ultimately may have their work cut out for them. It may prove a somewhat difficult task to break through the more cynical music fans that have difficulty accepting Momsen doing something outside of her acting resume.

Marilyn Manson took to the stage later that evening to a roaring crowd opening with Hey, Cruel World, a track from their latest album Born Villain. Having attended a plethora of Manson shows in the past it seems that indoor venues generally lend itself to the vibe that the band is going for and this performance only reinforced that opinion. It also didn’t hurt matters that Manson himself seemed to be more in performing spirits than  on the previous tours promoting the underrated Eat Me Drink Me and High End of Low albums of which no songs were performed.

Despite the exclusion of those two albums, Manson chose a wide variety of tracks from their extensive catalog.  Early favorites like Sweet Dreams, Tourniquet, Irresponsible Hate Anthem were met with wild enthusiasm with Manson bringing back his classic podium bible ripping performance for Antichrist Superstar. This time around, Manson himself was much more into partaking in playful onstage banter giving the audience valuable advice like,”Don’t get caught (smoking pot I assume), don’t get pregnant and don’t end up on my tour bus”.

Manson returns to vintage form during a performance of Antichrist Superstar

Overall, this performance had much more energy than I’ve seen in Marilyn Manson for some time and perhaps Manson himself has gotten out of his self described “low place” and is able to enjoy performing on a different level again.

Till next time folks

P.S. Wasn’t able to get the professional camera in but upon viewing the few shots I DID get with my pocket camera I realized how the concert going experience has certainly changed with the addition of the sea of mini glowing LCD screens. I’m curious, and feel free to sound off in the comment section, is excessive picture taking a normal part of today’s concerts or is it a new annoying trend? Let me know your thoughts.

Girl with the Flubber Tattoo
Blog at WordPress.com.