Season 2 of iZombie is FINALLY here!

When we last left our heroes and villains, things were in a state of disarray for just about everyone.

After months of hiding the truth from her ex-fiance Major, the truth finally comes out as Blaine points out what’s been in front of Major all along. Things, however, take a turn for the seemingly on top Blaine as Liv injects him with Ravi’s untested cure turning him human. He is, of course, royally pissed as this puts a damper in his gourmet brain business (but shortly thereafter is seen blissfully enjoying non-brain burrito).

Before returning to the land of the living, Blaine mortally wounds Major leaving Liv with only one option other than letting him die and infects him with the zombie virus with the lightest of scratches. Liv later tells Major that they “can be together”. Not in the way they wanted, but it’s what fate dealt them. Major reminds Liv that it wasn’t fate, it was her and her secrets that got them where they are. So Liv decides to give Major the remainder of the zombie cure (without asking!).

Liv’s brother Evan, is unaware of the epic Meat Cute shoot out, and shows up for his first day at work only to blown away by the explosion that zombie Lt. Suzuki sets off while still inside.

Liv rushes to the hospital and when is told by the doctor that her blood type is needed to save her brother’s life, she solemnly replies, “No.”

Evan’s managed to survive after having had multiple surgeries and blood donated from another doctor. Liv’s Mom is royally pissed and accuses her of being on drugs. Even Evan tells Liv to “Go away” and “Don’t come back.” So while we can breathe easy that Liv doesn’t have to carry on the weight of her brother’s death on her shoulders, things are less than sunny in the Moore family.

I like the fact the the show didn’t pick up directly where it left off and gave some time to the grief, turmoil and aftermath of the season finale. In life, people don’t get over things super quickly. Since it’s understandable that a show that consists of watching people wallow in misery isn’t exactly must see tv, a time jump is a good way of acknowledging that people need time to forgive, forget and move on.

Clive, while still not aware of the current Seattle zombie population, definitely thinks something is off about Lt. Suzuki’s supposedly heroic death and he has his sights sets on Major. Liv and Major haven’t been on great terms either after her string of secrets and bad decisions but manages to pick up the phone to take heed to Liv’s warning of Clive’s suspicions.

We also learn that with the absence of Peyton, Liv is learning to live with, as she describes, an exceedingly dull new roommate. 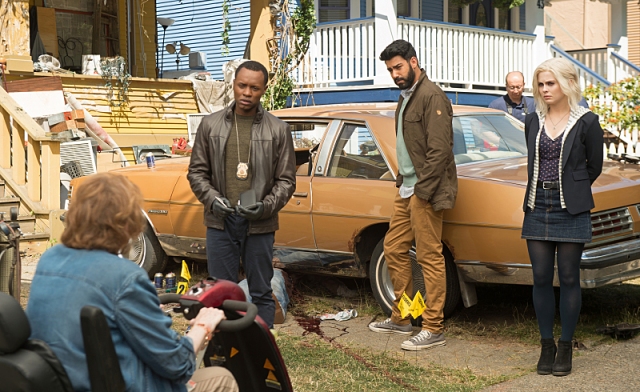 Liv, Clive and Ravi investigate the death of a curmudgeonly semi-racist old man who died after being crushed underneath a car. Of course his brains become Liv’s next meal as we watch her respond to the world around her accordingly. She moans and groans to Clive about a young man’s apparel “His pants are hanging so low they looks like a bra for his ass!”

While I generally enjoy the banter between Clive and Liv,  the awkwardly uncomfortable moment when her old man brain causes her to racially refer to Clive as “one of the good ones”, made me feel that maybe that line might have gone a tad too far, considering Clive is unaware of Liv’s condition. While his “I’m just gonna try and forget you just said that” retort was amusing, in the long term I don’t see how he can keep looking past her behavior. Especially when it takes a somewhat racist turn.  Hopefully his detective skills will help him to start asking the right questions soon so we can move on from the case of the week plot points.

Speaking of plots! Freshly human sophisti-Blaine “consoles” a couple in mourning as owner of the appropriately named, Shady Plots Funerary. “Let’s take this journey together”, he says, with his trademark charismatic smirk.

Liv soon pays him a visit telling him that she needs a vial of Utopium because both him and Major may not be as fully cured as they thought. While that remains to be seen we learn that the cure does have some interesting side effects as we see the hair on Blaine’s neck literally stand on end as Liv enters the room. His zombie sense is tingling!

Blaine enthusiastically enjoys some chocolate, seemingly agrees to make inquiries as he swears he is going legit in his current business ventures and amusingly mocks Liv’s ex-fiance’s name, “Somewhere out there, Major Lilywhite, the most presciently named zombie of all time, roams the Earth“. Liv is not buying into his sass or his supposedly legit story and retorts, “Oh, and you can save your respectable businessman jiggery-pokery for someone who might buy it.”

Speaking of Major, I find it interesting that he holds very little in the way of animosity toward his roommate considering Ravi has been aiding Liv in her secret. I guess that’s “Bros before hooo….ex-fiances” as Ravi says.

Shortly after Liv’s visit to Shady Plots, we watch as Blaine looks over his freshly delivered Utopium supply, housed in a casket of course, as well as pay a visit to Don E, the late Scott E.’s brother, for information on who cut the supply of Utopium with the zombie virus.

We also learn that Major experiences hair-raising tingling zombie sensations too as he meets up with a client in his personal training business. After-all, Major doesn’t have a great resume after the year he’s had. This seems like a good job for him. Put those abs to use buddy!

Steven Weber is back as Vaughn, the evil face of Max Rager. He now has a red headed femme fatale named Gilda, aiding him in his dastardly purposes as they blackmail Major into becoming their personal zombie slayer using a recording of his conversation with Liv, completely outing him as the Meat Cute assassin.

Oh, and how did Vaughn obtain access to Liv’s private phone conversations you ask? Liv’s new “boring” roommate is none other than Vaughn’s villainous partner in crime, Gilda.

Overall verdict on this episode?

By allowing the passage of time we are able to see a change in some of our characters while also seeing where they are likely headed next. While I enjoyed the guest spot of Adam Rose as the accidental murderer, I think allowing Clive to be in on the big secret, rather than just around for the case of the week, might make for more interesting scenarios. Let’s hope we get there by mid-season. There’s only so many personality shifts Liv can have around him before he’s had enough.

Also, this episode only feeds into my obsession with David Anders and his ability to chew scenery like nobodies business. He just oozes charisma and I hope to see more interaction with him along with Liv and her group.

Looking forward to next week!